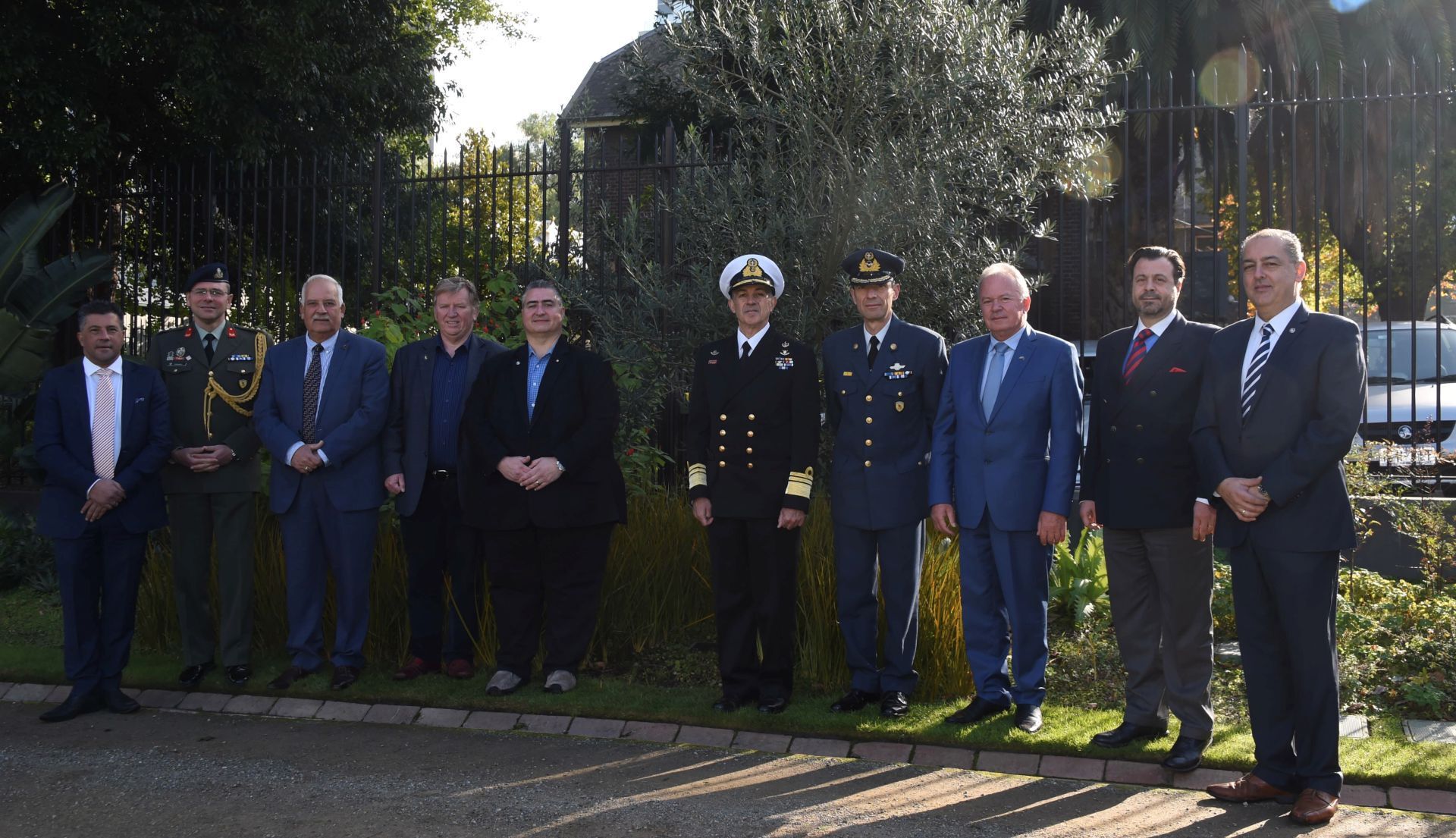 A delegation from the Hellenic Armed Forces, together with representatives of the regional government of Crete, were recently welcomed to the Parliament of Victoria by the President and Speaker of Parliament.

The meeting took place as part of the recent visit of representatives to Australia, as part of various commemorative events organized in recognition of the 81st anniversary of the Battle of Crete, which took place in May 1941.

The delegation was welcomed to the Victorian Parliament by Speaker Nazih Elasmar, who spoke of the enduring gift of democracy that binds our two countries together as well as the ties through the Hellenic Bond to Australia’s Anzac history and beyond. He also underlined the great contribution of the Greek community in Australia to the development of Australia in many fields of activity. A migrant himself, the President recognized Australia’s important place as a host country for many peoples.

Mr Tarlamis spoke about the new Lemnos Remembrance Trail initiative which will help achieve the aim of the Lemnos Gallipoli Memorial Committee and many others by honoring the link between Australia’s involvement in Gallipoli and the Island of Lemnos, highlighting the Committee’s erection of the Australian Pier Memorial and the Committee’s two new memorials to be erected in the coming months (recognizing the Anzac soldier of Lemnos and the Royal Australian Navy at Lemnos).

The Hellenic delegation – led by Vice Admiral Drymouris – endorsed the comments, acknowledging the important links between Australia and Greece, both in times of war and peace, and looked forward to working with the Australian Government. to make the path of remembrance a reality.

Addressing the delegation, I pointed out that as they passed through Melbourne in recent days, they had followed in the footsteps of some of the Anzacs who had served in Greece. The park of the Sanctuary of

Remembrance, where the delegation had taken part in the commemorations of the Battle of Crete, was also the training camp for the Royal Australian Naval Bridging Train, which not only served at Lemnos and Gallipoli but is recognized as the most decorated unit of the Australian Navy. in the First World War. And in nearby St Kilda, a young man of Hellenic descent – gunner James Zampelis – joined the Australian army, served in the Greek campaign and was killed in the Battle of Crete – his death honored by the erection of a commemorative plaque in the Cretan village of Mournies, supported by the Council for the Battle of Crete. The suburb of Yarraville has the distinction of being the birthplace of Warrant Officer Thomas Fenton, who also served in Greece – notably at the Battle of Rethymno in Crete, escaped capture by the Germans to serve in the resistance Greece and whose grandson Jon Ossoff now sits. as a senator in the United States Congress. These are just a few of the many experiences connecting Australia and Greece, through local communities and families in both countries.

A feature of the welcome was a visit to the Hellenic Anzac Memorial in the Parliamentary Gardens, a memorial that includes a thriving olive tree and a commemorative plaque. The memorial commemorates the solidarity forged between the Greek and Australian people – from Lemnos in 1915 to the Greek campaign of 1941 – and in the post-war waves of migration. The memorial was opened by the Premier of Victoria, the Honorable Daniel Andrews, in May 2017.

As the author of the memorial text, I explained the inclusion in the dedication of words taken from an ancient Greek memorial in Athens which was read to the Australian war correspondent and historian, Charles Bean, after the end of the war. The text was engraved on a stone memorial in the Dardanelles, in honor of the Greek soldiers who fell there in 440 BC. The memorial bears the words in Greek and English. The words are:

The Hellenic delegation expressed a desire to continue to work with our commemorative community organizations in Melbourne, to build on the solidarity of our peoples and to work towards the realization of the Anzac Trail in Greece. The meeting ended with the exchange of commemorative gifts, Mr. Tarlamis presenting the delegation with copies of my own book Lemnos & Gallipoli Revealed.

Jim Claven is a trained historian, freelance writer and published author. He has written Lemnos & Gallipoli Revealed, the next Greek adventure about the Anzacs in the Greek countryside as well as numerous historical articles, presentations and guided tours on the Anzac Trail in Greece. He can be contacted by email: jimclaven@yahoo.com.au