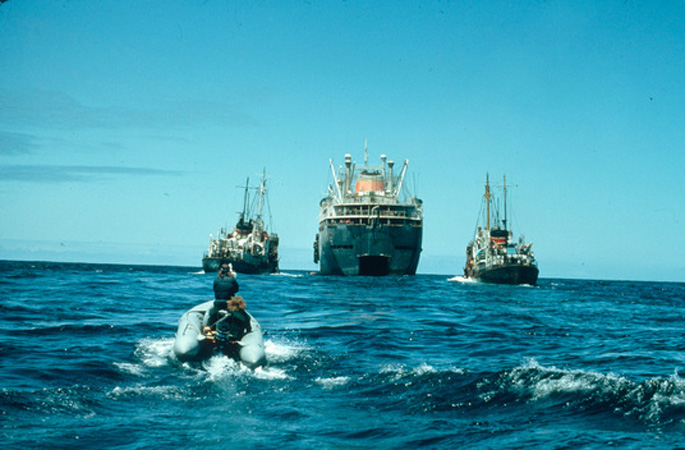 “Red Leviathan: The Secret History of Soviet Whaling” by Ryan Tucker Jones struck me as unexpectedly topical for this particular time in my life. And not only because I have just returned from a spectacular Aurora Expeditions cruise to remote Scottish islands aboard the MV Greg Mortimer, during which I was able to observe one of the living wonders of the world – the magnificent minke whales in their natural habitat in the North Atlantic.

In fact, it was not one whale but three, playing happily just 20 meters from our inflatable, unsinkable Zodiac shuttle near the island of St Kilda, casually showing off their glistening greyish masses, then diving down again and making us sign with the huge fans of their tail fins. “Yeah yeah!” the eight passengers aboard our Zodiac, including yours truly, howled in unison, like a pack of hungry wolves. Having forgotten our cameras and iPhones, we watched these incredible creatures knowing that we will remember the scene for as long as we live.

It was an undisputed highlight of the expedition, and yet alongside the happy memories of the cruise, reading “Red Leviathan” shortly after returning home could not fail to conjure up far more gruesome associations – of the brutal war going on in my native Ukraine.

No matter how far-fetched it may seem at first glance, the more I delved into ‘Red Leviathan’, the more appropriate and relevant it seemed. Let me explain. Until now, shocked and stunned by the actions of the Russian military against civilians in Bucha, Mariupol, Melitopol, my native Kharkiv and many other Ukrainian towns and villages, the entire civilized world continues to wonder: Why ? Where does such indescribable cruelty to innocent human beings come from?

Those to whom these questions still seem unanswered should read “Read Leviathan” – the meticulously documented and deeply felt story of the “cetacean genocide”, or “Cetacide” – a neologism, coined by Tucker Jones to describe the brutal, clandestine violence and unjustified slaughter of over 600,000 whales in less than 50 years of Soviet rule between the 1930s and 1980s.

The slaughter was carried out using small and nimble ‘kitoboy’ (whale killer) vessels, equipped with crude harpoon cannons that tore apart the whales’ bodies, causing untold suffering. Moreover, the killers, having collected valuable body parts from their victims, left most of the meat to rot in the sea – unable and unwilling to process it. In my 35 years in the USSR, I have never eaten or even seen whale meat, and I don’t know anyone who has eaten it! Why then?

At the same time, Soviet marine scientists were commissioned to conduct detailed research into the biology and anatomy of the meticulously slaughtered whales.

The whole whaling industry was carefully camouflaged by Soviet propaganda as some sort of heroic endeavor, and the bloodstained kitoboys were routinely hailed as heroes, invited into schools to talk about their “achievements”.

Yes, but they were animals, not people, they killed, you can object to me. Is it an exaggeration to compare their actions to genocide?

Suddenly, associations with the war in Ukraine begin to seem much less far-fetched. Let’s face it, modern Russia has inherited the whole brutal Soviet mentality that the life of an ordinary human (let alone an animal’s) doesn’t matter. During my 35 years in the USSR, I often witnessed indescribable cruelty to humans and animals. It would pain me very much even to describe how stray dogs and cats were often culled in Moscow and other Soviet towns and villages. It was a real dog-eating dog society, because anyone who could be instinctively cruel to our little brethren, whether cats, dogs, birds or whales, would not hesitate to shoot an old man or child just for being from a different ‘tribe’, or just to steal their shoes and post them at home.