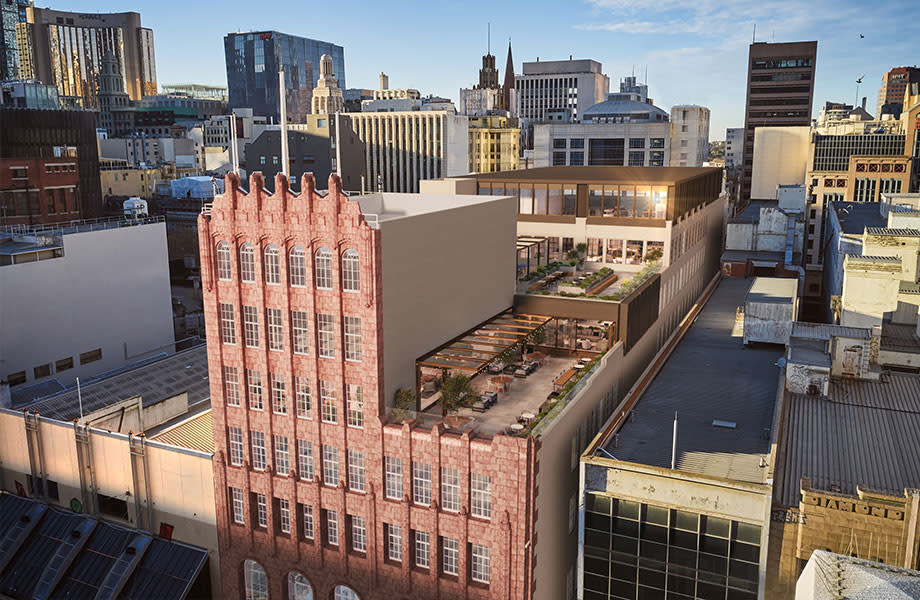 Redevelopment of the characteristic pink-hued 1930s building is due to begin in September after David Jones leaves. Work on the six-storey commercial block is expected to be completed by the end of 2023.

Newmark Capital paid $121 million for the site at the end of 2020, a 20% discount on the pre-pandemic price of $150 million when David Jones owner Johannesburg-listed Woolworths Holdings put the building on the market the previous year.

Woolworths Holdings said it divested the asset to focus its business on its largest store at 310 Bourke Street across the road.

Newmark launched a full bidding process for the project’s builder in February before selecting Maben Group, which had worked on similarly sized redevelopments and large CBD projects with heritage complexities.

The construction company has delivered over 165 projects for Australian clients including Vicinity Centres, GPT Group and AMP Capital.

Part of the complexity of the project lies in the upper floors of the building, used for decades mainly as storage, which will now be transformed into large loft-style office spaces with high ceilings.

Maben Group Director Damien Marasco said The urban developer heritage redevelopment would involve the best team in the business, along with hand-picked contractors experienced in working on existing structures, to respond quickly to any issues that may arise when redeveloping an older building .

“When it comes to working on significant heritage-listed buildings, communication and dedication to the project really plays a central role, at all levels of the team,” Marasco said.

“Scheduling and procurement are major considerations, as for new construction we can rely on drawings when purchasing items such as escalators.

“But, when working with an existing structure, we have to wait until we can expose the existing conditions before we measure the site. This can lead to serious risks if we don’t do things right in the early stages. »

When complete, around 900 staff from the Melbourne-based companies of marketing giant Clemenger Group and sister operations Omnicom Media Group will move from its St Kilda Road office to the building at 299 Bourke Street, occupying the 7,500m² of office space across four higher levels. .

The ground and first floors will be dedicated to a high-end retail offering with Mecca signed to open a flagship store as well as Rodd and Gunn, who plan to launch a bar and restaurant concept overlooking Little Collins Street.

▲ A rendering of the redesigned interior of 299 Bourke Street, Melbourne.

Above the five new upper floors, Newmark plans to deliver a roof terrace.

Newmark Capital’s managing director of property, Angus Machutchison, said the redevelopment of the building, purchased amid Melbourne’s lockdowns, would support the post-Covid revitalization of the CBD retail sector.

“Newmark’s previous experience has focused on the management and development of contemporary buildings in the retail and office sectors,” said Machutchison.

“The project differs from others because the heritage restoration element is a delicate but integral part of the project.”

Melbourne’s most expensive and tightest shopping street before the pandemic, Bourke Street Mall has been hit by historically high vacancy rates, similar to Collins, Elizabeth and Swanston street as well as other shopping streets in the CBD.

Retail sales have now risen for five straight months to a record high in May despite the Reserve Bank of Australia raising the official interest rate for the first time in more than a decade.

According to the latest data from the Australian Bureau of Statistics, department stores saw the biggest increase in sales in May, up 5.1% and 18% from pre-pandemic levels.

Spending in cafes, restaurants and takeaways rose 1.8%, although Ben Dorber, head of economy-wide surveys at ABS, said rising food prices played in the increase in expenditure.

Construction has begun on the Preston apartment development, Oak on High