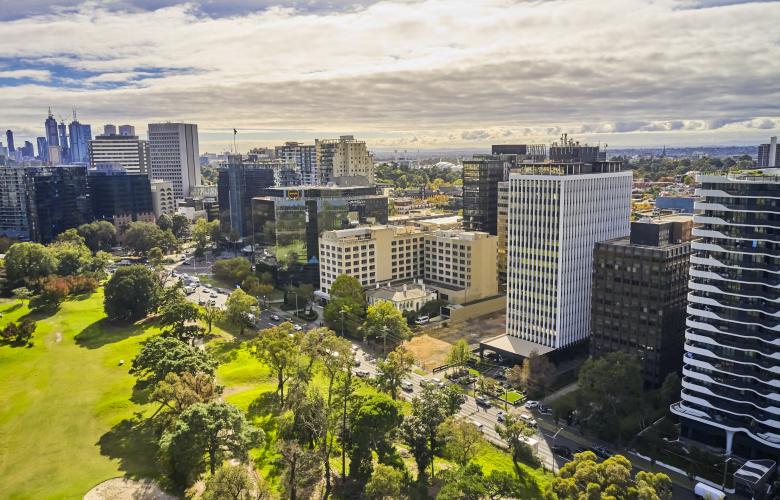 With its magnificent views across Lake Albert Park and the golf course to Port Phillip Bay and Melbourne’s CBD, the Bayview Eden Hotel has become one of the largest remaining city center grounds in the precinct of St Kilda Road.

Following the success of their recent sales campaign at nearby Bayview on the Park, Peter Harper, Josh Rutman, Nick MacFie and MingXuan Li of JLL have been appointed exclusively to sell Bayview Eden at 6-9 Queens Road, Melbourne.

Mr Harper said: ‘The Bayview Eden has long been a favorite of business and leisure travellers, which bodes well for its future as short or long term accommodation, or for conversion to other uses. The hotel is presenting to an excellent standard, being sold with the benefit of vacant possession, and we expect a wide range of investor interest, very similar to what we experienced for the sale of the Bayview on the Park nearby.

The ravely-reviewed four-star hotel and its adjoining land – a rare triple development at 6-9 Queens Road – will be offered via an expressions of interest campaign that is expected to attract a strong commitment from investors and developers alike. the search for a high quality urban periphery. opportunities with scale and future benefits.

Mr Rutman said: ‘We have been fortunate enough to manage significant sales in recent years along St Kilda Road and Queens Road but this is the second largest wholly owned land property in the whole of the enclosure, and we’ve already seen interest from some in the industry. major players who understand the rarity of such an opportunity,” Mr. Rutman said.

The 6,974m² site includes a second main frontage to the commercial village along Queens Lane and is zoned commercial 1, allowing for ultimate flexibility and a range of potential end uses including commercial, residential, commercial and hotel management (STCA).

“While the prestige of the precinct is traditionally associated with St Kilda Road Boulevard, it is in fact Queens Road which benefits from the unobstructed sight lines over Albert Park towards Port Philip Bay and Melbourne CBD. Not surprisingly, sites along this thoroughfare were highly sought after when they became available.

“Queens Road has a very good reputation for providing high quality residential, commercial and retirement living products, and due to the scarcity of these offerings, adoption by various end users has always been strong,” Mr. Rutman said.

The site presents excellent opportunities for future workers and residents: it is within walking distance to Melbourne’s central business district, the arts district, the Royal Botanic Gardens and Lake Albert Park. It is also close to prestigious private schools such as Melbourne Grammar.

Mr Harper said: ‘Bayview Eden is located in one of Australia’s most thriving development areas, surrounded by several parks, excellent retail, numerous office buildings, the Alfred Medical Precinct , access to some of Melbourne’s best suburbs and world-class transport infrastructure soon to be enriched by the new underground Anzac station. With significant existing improvements and such extensive and flexible land ownership, there are several different strategies a buyer can use to take full advantage of the strength of this location.”

JLL recently negotiated Bayview on the Park Hotel at 50-52 Queens Road which has been sold to Altis Property Partners and Aware Super who will undertake a Build-To-Rent development. At $72.7 million, it was one of the largest land deals in downtown Melbourne in 2021.

“It’s no wonder developers have targeted this property – its three distinct housing estates, prominent double frontages and stunning uninterrupted views across Lake Albert Park and Port Phillip Bay to the city are fundamental elements of incredible developments for a major project in any market cycle,” concluded Rutman.

The listing also follows the recent announcement of the historic sale of Bob Magid’s Lindrum Hotel to developer Time & Place for approximately $50 million.

Melbourne restaurateur receives no applications despite offering $13,000 to backpackers