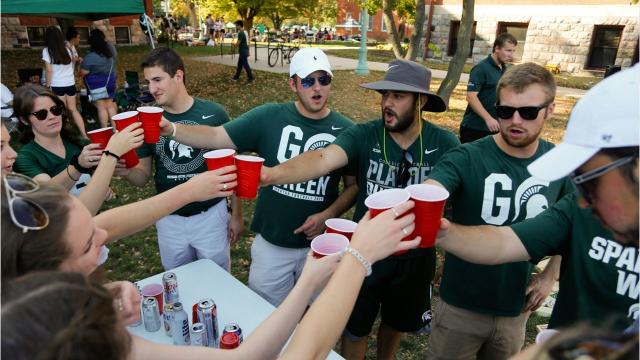 On Monday, Twisted Vine Brewery signed a lease to occupy the 7,500 square foot space that has long housed The Garden nightclub in the East Village. The club moved earlier this year to make way for a $ 6.3 million renovation of the nearly 150-year-old brick building at 112 SE Fourth St. as part of the planned Market District development.

Real estate developer and owner Tim Rypma said the five Twisted Vine partners will begin work on the brewery and tasting room in January and hope to open to the public in late spring.

Plans for the brewery also call for a 5,000 square foot patio.

One of the partners, Brian Sabus, said the brewery will close its current location at 3320 Westown Parkway, near the Valley West Mall.

Twisted Vine began as a passionate project for home brewers Sabus, Steve Becker and Steve Breman in 2011, with a three barrel brewing system in a 20ft by 20ft space inside the Madison County Vineyard in St. Charles.

In 2015, two additional partners, Jasen Garrett and Paul Galloway, joined the team, and by 2016 the operation had moved to the 7,200 square foot building it currently occupies in West Des Moines, previously the home of Denny Arthur’s nightclub.

The building in the planned downtown location dates from 1874 and originally housed the Central Oil Works. It is considered a contributory structure in the East Village list on the National Register of Historic Places.

Twisted Vine will occupy the first floor. The second floor is expected to become two office spaces, one of which has been leased to St. Kilda owner Alex Hall. The third floor will house four high-end apartments.

“The transformation that the market district is going to have in this area is going to be really exciting and really fun over the next couple of years,” said Rypma.

The building is located at the north end of the market district. Plans for the project’s initial 39 acres, currently occupied largely by industrial buildings and warehouses, call for a $ 750 million redevelopment, complete with a concert hall, 150-180 unit apartment complex with a commercial space on the first floor, a hotel and an 8 acre park along the Des Moines River. The works of relocation and improvement of streets and public services are already underway.

Twisted Vine’s new location will be about a block south of the Des Moines branch of Peace Tree Brewing Co., which opened in 2016, and its close neighbor, 1717 Brewing, which opened. in 2018. News of Twisted Vine’s planned move follows June. announces that Big Grove Brewery will open a branch in Des Moines in the old Crescent Chevrolet building, 555 17th St. at the base of Sherman Hill, next March.

The city center is also home to Exile Brewing and Court Avenue Brewing, and nearby is Confluence Brewing on the south side of Gray’s Lake.

The real estate industry weighs on the residential market 2022

Help reveal a world that is still closed