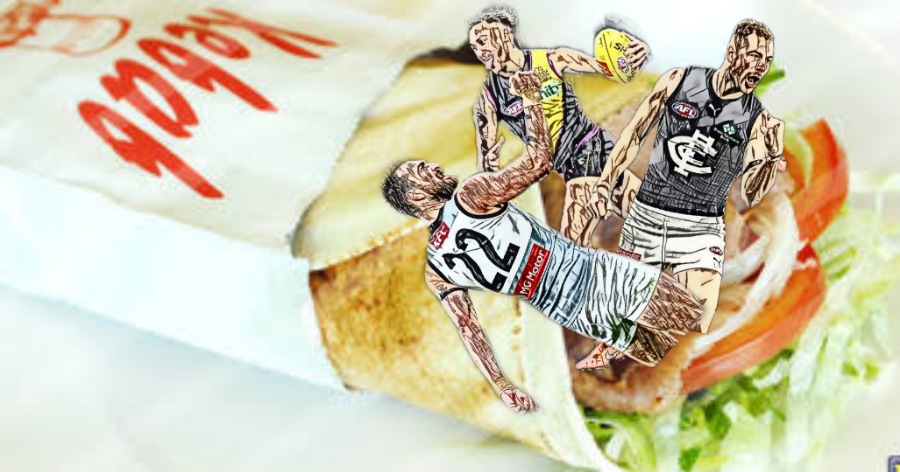 Look, I know it’s been several days. I wouldn’t eat it myself…but hey, you might be in the mood to take a risk and eat what Josef Mack left over from Round 14.

I don’t know what Carlton was thinking before this game without key defenders. Of course, they may have twenty-seven backups on their list; but what contingency plan did they have in place when all were injured? Terrible list management of the Blues.

They almost looked like they ripped it off at the end, with a heroic performance of the big H in the final quarter. All the media is talking about is Shai Bolton’s show-and-go to Sam Docherty, or the canceled goal; so I’m going to ignore all that and talk about football for once:

Have you seen that series of bananas pulled by Harry? My guy took a step and rinsed it perfectly… went about forty yards on the kick. Weird.

As for Richmond, they suddenly seemed to find their rhythm… It only took them a year and a half to do so.

Despite Carlton’s strong midfield – which crushed the Rods earlier this year – Richmond managed to get the upper hand in clearances. A differential of forty to twenty-two was flipped to forty-one to twenty-seven the other way.

The only possible conclusion we can draw from this is that Marc Pittonet is the greatest footballer to ever play football, and he is poised to win the next three Brownlow Medals.

Is this really the score? Where the hell does that come from?

The Dons absolutely spanked them, all around the park. On the contrary, they should have earned more.

More importantly for the Bombers, their work rate was sensational through all four quarters of a football game. It just goes to show that the key to winning football matches is to try… and also to be good at football.

The Saints, however… as Brian Taylor would say, Boy-oh-boy-wowee. It’s a long way to September now.

Currently eighth in percentage with Carlton, Freo, the Dogs, Cats, Lions and Swans twice – all still to play.

If they want to make it happen, Ratts will have to find a way to be a little more creative going forward. King and Higgins are great players but they can’t do it all themselves; teams realize how predictable the Sainters have been to that end.

Plus, they’ll need to make over thirty-eight tackles per game…a long way to go.

At the risk of spoiling an article I was thinking of writing on this subject; I want to use this game as an opportunity to talk about ‘Supercoach Brain’.

Charlie Dixon was terrific this game, and his return does a lot of things that usually go unnoticed on the stat sheet.

First, he gets the main game for the Swans. Todd Marshall struggled earlier in the year, but really found his feet, even before the great Charlie returned.

But now that Dix is ​​back? Todd plays on someone his size and he enjoys it.

Because Dixon has scored fewer goals than Marshall (partly due to accuracy issues), this sort of thing goes unnoticed by those infected with the increasingly prevalent disease; known as “Supercoach Brain”.

Those with Supercoach Brain love the Karl Amons of the world.

‘Look how many hits he gets!’ ‘Absolute ball magnet.’ “This is a shoe for all Australians!”

They are totally unaware that winning football games is about choosing the best option; and getting takedowns that bring the ball inside-out, not outside-in.

There are only two known remedies for Supercoach Brain:

The first is to have a life; and the second is actually playing a game of soccer.

Protect yourself and your children from this horrible disease at all costs.

The enemy Geelong faces twice a year, potentially even a third time if we advance into September. The perennial powerhouse that still features at the time of the finals.

Of course, I’m talking about… the goodbye.

You’d think the old legs would benefit from a rest; but the bye is a mysterious entity that crushes our form…

The cats looked good. Despite the 12.9 score line, Geelong managed twenty-nine shots, so some accuracy issues. But other than that, the Eagles seem to have found a connection between their groups.

It was built on good defensive pressure – and most importantly – good use of the foot; turning the ball over only fifty-six times for the game, to the Cats sixty-one.

There was controversy surrounding the free kick paid to Jeremy Cameron directly on the siren; and I would like to thank the West Coast Eagles for the opportunity they gave me.

With the subsequent admission that Geelong did in fact benefit from an incorrect call; I can now point to that insignificant mid-season game whenever someone accuses me of bias in the future… so here goes:

See what happens when you put the whistle away?

We were treated to a goal fest on Saturday night as one of football’s best rivalries was allowed to go head to head at the Giants Oval.

It’s a shame that there are more seagulls in the stadium than people; because it was an absolute belt!

The Doggies’ third-quarter run was the difference in the end, but other than that, it was a good old-fashioned shootout.

To me, the key thing this game proves is that any coach who hands over a reserve man for the whole game, should have their Australian citizenship revoked (except Chris Scott of course).

All that space up front gives us fast running, one-on-one and back action.

The more I say!

The Suns kicked out late in that game, outplaying a plucky Crows side.

But I want to focus the latter on healthier content; to balance my usually cynical tone.

He is the grandfather of Alex Davies, who attended his first AFL match after flying in from Japan.

Apparently he wears his Suns products everywhere there.

Can you imagine how rare it would be to see a Gold Coast Suns fan in Japan?

It’s like seeing someone in a Melbourne Storm jersey…in Melbourne.

You can read more about Josef in his substack located here: https://josefmack.substack.com/

Want more of this stuff? Join The Mongrel to get it!